A study of outreach activities published in the journal Nature Astronomy has presented the results of a survey gathered from 2587 IAU members. The survey is the largest systematic study of astronomers’ outreach activities. Astronomers were found to show an exceptional internal drive to organise and participate in science communication activities.

Because of the ubiquitous nature of its questions and the stunning insights into the nature of the Universe, astronomy has often been thought of as appealing and the natural science with the most far-reaching popularisation efforts. A recently published study of the outreach activities of IAU members, Bustling public communication by astronomers around the world driven by personal and contextual factors [1], has shown that professional astronomers may be engaging with the public more than scientists in any other field.

The study, which was conducted by surveying a record-breaking 2587 professional astronomers [2] of the IAU in early 2016, found that as many as 87% participated in scientific outreach activities, both by taking part in events and engaging with representatives of the media. Those astronomers who participated in outreach activities reported an average of 18 activities in the preceding year.

The leader of the study, Marta Entradas (London School of Economics and Political Science & ISCTE-IUL) explains: “What surprised me most about this study was the high activity found among astronomers working in less developed regions, which in some cases may exceed the activity of those working in Europe or in the US.”

The vast majority of astronomers [3] prefer to interact with the public in traditional ways, through lectures and school talks, and fewer than 20% use social media and digital platforms for outreach activities. Most engagements with news reporters are conducted by senior astronomers, while junior scientists prefer face-to-face interactions, and they are motivated — above all else — intrinsically. “We have a passion for our science and we feel it is our duty to share it widely,” explains Teresa Lago, the IAU General Secretary. “We feel privileged to work in astronomy and want to share the excitement as our knowledge of the Universe unfolds.”

Despite Europe and North America having larger communities and older traditions of astronomical research and public engagement, as well as the easier access to funding, the most active publicly communicating astronomers come from South America and Africa, the homes of many outstanding telescopes [4]. Their efforts have been thoughtfully supported by the IAU Office for Astronomy Development , which awards funding to socially aware projects for the public communication of astronomy.

The outreach activities in which IAU astronomers participate tend to be self-organised. Despite 86% of astronomers being in contact with communication experts at their institutions, only 43% of those decide to use the available outreach structures, the rest preferring instead to organise their own activities.

Marta Entradas concludes: “Even though a large number of IAU astronomers do not receive (or look for) any outreach training or funding, their impact on the popularisation of astronomy is immense and does not depend on external factors such as their gender, potential rewards or fear of peer criticism — all that matters is intrinsic: their love of astronomy. I believe that other sciences can learn something from this community.” [5]

[1] The study was carried out by Marta Entradas (London School of Economics and Political Science & ISCTE – University Institute of Lisbon) and Martin W. Bauer (LSE) and was published on 26 November 2018 in the online journal Nature Astronomy. A summary of the study has been published as a news article in the journal Nature, under the title Astronomers have an outsize passion for outreach.

[2] The authors contacted 9162 active IAU members and repeatedly stressed the importance of participation for those astronomers who do not participate in any outreach activities. The survey data was provided by 30% of the prompted astronomers.

[3] On average, astronomy communicators had held four public lectures and two talks at schools in the preceding year. All other outreach activities were less popular.

[5] Of the 2,587 surveyed astronomers, 68% reported not having received any outreach training and 71% reported not being awarded funding for outreach activities. 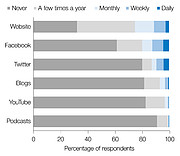