The International Astronomical Union (IAU) was founded in 1919. Its mission is to promote and safeguard the science of astronomy in all its aspects, including research, communication, education and development, through international cooperation. Its individual Members — structured into Divisions, Commissions, and Working Groups — are professional astronomers from all over the world, at the Ph.D. level and beyond, who are active in professional research, education and outreach in astronomy. The IAU also has Junior Members. The IAU has a total membership of 12439. The Individual and Junior Members Directory contains 12112 names in 93 countries worldwide. These Members are labeled as "active" in the IAU database meaning they have a valid email (are able to vote and stay connected to the IAU activities) and are affiliated to at least one Division. IAU membership spans 93 countries. Out of those countries, 85 are National Members. In addition, the IAU collaborates with various scientific organizations all over the world.

The long-term policy of the IAU is defined by the General Assembly and implemented by the Executive Committee, while day-to-day operations are directed by the IAU Officers. The focal point of its activities is the IAU Secretariat, hosted by the Institut d'Astrophysique de Paris in France. The scientific and educational activities of the IAU are organized by its 9 Scientific Divisions and, through them, its 38 specialized Commissions covering the full spectrum of astronomy, along with its 47 Working Groups.

Among the other tasks of the IAU are the definition of fundamental astronomical and physical constants; unambiguous astronomical nomenclature and informal discussions on the possibilities for future international large-scale facilities. Furthermore, the IAU serves as the international authority for assigning designations to celestial bodies and surface features on them. This authority was recognized by the United Nations in 1982 in UN Resolution 13 on Extraterrestrial feature names (p.33). 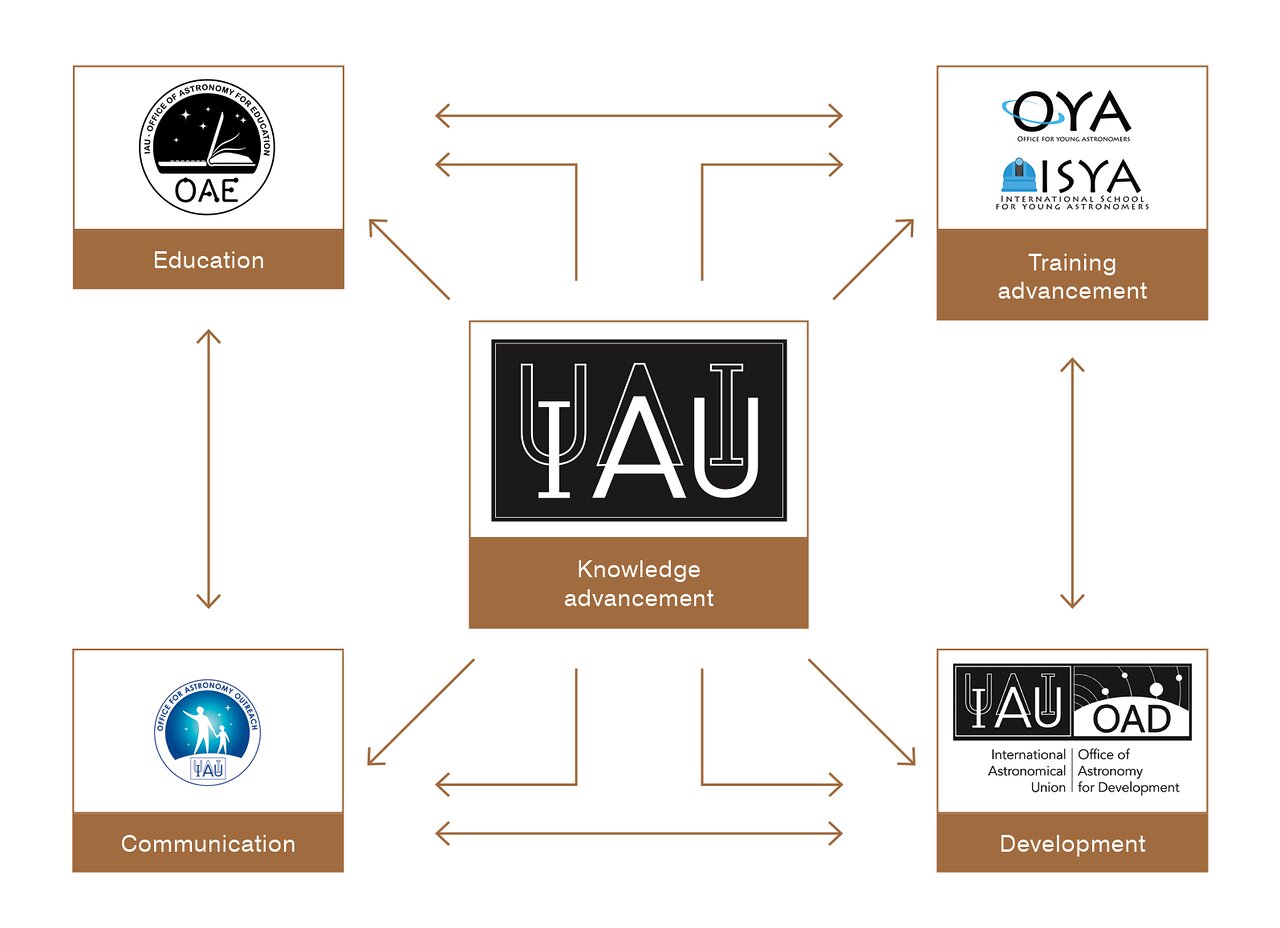 This web site provides on-line information on the Union's activities and links to the web sites of the IAU Divisions, Commissions and Working Groups. Further contact with the IAU membership is maintained through the IAU Catalyst, the revitalized, electronic-only Information Bulletin which is downloadable from this web site as well as through Press Releases and Announcements.

You can read more about the IAU on the page The International Astronomical Union — the first 90 years.

The new extended IAU Strategic Plan 2020–2030 provides a comprehensive overview of the IAU, describing how the different IAU activities fit together and how they complement each other, and presents its long-term goals.

In 2019, the International Astronomical Union (IAU) celebrated its 100th anniversary. To commemorate this milestone, the IAU organised a year-long celebration to increase awareness of a century of astronomical discoveries as well as to support and improve the use of astronomy as a tool for education, development and diplomacy under the central theme "Under One Sky". Find more information here: IAU 100.

The IAU follows the regulations of the International Science Council (ISC) and concurs with their 'Principle on Academic Freedom in the Conduct of Science' on non-discrimination and universality of science.

In particular (Statute II.7): "The Principle of Freedom and Responsibility in Science: the free and responsible practice of science is fundamental to scientific advancement and human and environmental well-being. Such practice, in all its aspects, requires freedom of movement, association, expression and communication for scientists, as well as equitable access to data, information, and other resources for research. It requires responsibility at all levels to carry out and communicate scientific work with integrity, respect, fairness, trustworthiness, and transparency, recognising its benefits and possible harms.

In advocating the free and responsible practice of science, the Council promotes equitable opportunities for access to science and its benefits, and opposes discrimination based on such factors as ethnic origin, religion, citizenship, language, political or other opinion, sex, gender identity, sexual orientation, disability, or age."

Information about the use of IAU images and videos is available here. Please note the restrictions on the use of the IAU Logo.

The IAU has adopted anti-harassment guidelines aimed at preventing any form of harassment during IAU meetings and sponsored activities.

Participants in IAU-sponsored activities who feel that they may have been subjected to discrimination should contact for advice the General Secretary, or one of the IAU Executive Committee members.