IAU Commission B7 at work 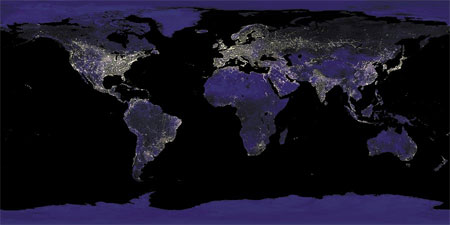 The map of light pollution all around the globe

For many people the greatest joy from astronomy comes from simply standing beneath a clear dark sky and marvelling at the heavens. Today, however, a growing majority of people can no longer see the true beauty of the night sky from their homes. Even some of the brightest stars are lost in the glare of light pollution from our towns, cities, roads and urban conurbations. For many people the sight of the Milky Way stretching across the night sky is a childhood memory; sadly, today a new generation is growing up who have never seen our own galaxy, the place we call home in the Universe. Astronomers define light pollution as “artificial light that shines where it is neither wanted, nor needed”. The most obvious everyday manifestation of light pollution is in the increasing illumination of our night sky and the subsequent difficulties in observing astronomical objects from polluted locations. Light from poorly designed, incorrectly directed light fixtures shines into the sky. There it is scattered by air molecules, moisture and aerosols in the atmosphere causing the night sky to take on an, often, bright orange appearance; a phenomenon known as “sky-glow”.

The problem of light pollution is not only a menace to astronomers. People who have no interest in astronomy are affected by the intrusion of light into their properties; be it a streetlamp that shines into their bedroom or the danger caused to motorists from the glare from poorly designed/placed streetlights and floodlights. Light pollution also has numerous direct impacts on the environment. Not only can some high-powered lights produce more carbon dioxide over a year than a modern day diesel car produces in about 500 kilometres, but the strain on wildlife in both urban and rural locations is great. Light pollution is also an unnecessary waste of energy that eventually gets translated into a great and unnecessary cost to economies worldwide.

Light pollution and other such electromagnetic interference (from radio waves for example) affect not only amateur astronomers, but professionals and their observatories. Today the International Astronomical Union’s Commission B7 works to protect existing and potential observatory sites from pollution at all wavelengths of the electromagnetic spectrum. With this in mind Commission B7 works to preserve (and seeks to defend) important dark sky sites around the world. These include the professional observatories of Hawaii, continental Spain, the Canary Islands, North America, South Africa, Chile and Australia. The commission has identified three classes of dark sky sites to be monitored and preserved, designated classes A, B and C. A class sites are sites with telescopes with mirrors already on site, with an aperture greater than 6.5 m, with undetected light pollution at zenith. Class B sites are sites for telescopes being planned or built, with apertures greater than 6.5m, with undetected light pollution at their zenith. The final class of sites are other major observatory sites with operating telescopes having apertures greater than 2.5m and zenith light pollution levels less than the natural variation in night-sky brightness associated with the 11-year solar cycle.

But the IAU Commission B7 does not only work to safeguard professional astronomical sites, though this is its main concern. The Commission 50 Controlling Light Pollution Working Group is strongly seeking the means to restrict light pollution, through legislation, regulations and other methods at all levels of governance from national bodies to regional and local organisations. Through cooperation with amateur astronomers, lighting engineers and all who are concerned by light pollution, including the International Dark-Sky Association, the IAU Working Group raises awareness of the plight of the night skies through publications, conferences and on the web.

Some of the IAU Working Group’s members are also involved with scientific projects such as the monitoring and modelling of light pollution. These studies using detailed satellite imaging show that there will be no dark skies left for most of Europe within the next 25 years (read more). Satellite data also allows for estimates to be made of the monetary waste of light pollution via the measurement of light emitted into space.