The 2018 General Assembly will take place from 20–31 August 2018 at the Austria Center Vienna in the central European city of Vienna, Austria. This conference, which takes place every three years, will welcome more than 3000 astronomers from over 88 countries around the globe. The assembly marks the first time the event will be held in Austria, and is organised jointly by the University of Vienna, the Austrian Academy of Sciences, and the Austrian Society for Astronomy and Astrophysics.

General Assembly participants will address key topics in contemporary astronomy and assess the latest scientific progress in a number of specialised areas. As a result of the event, the IAU expects an exciting exchange of scientific knowledge and international collaboration, resulting in important advancements for the astronomical community and beyond.

“The IAU is delighted to bring our triennial General Assembly to Austria, a place that is special in the astronomical community thanks to its remarkable tradition in Physics and in the Philosophy of Science. The work of Christian Doppler, Ernst Mach, Ludwig Boltzmann, Erwin Schrödinger and many others, together with the conceptual developments of the Vienna Circle, has substantially influenced the recent progress of astronomy and especially of cosmology, a discipline that more and more frequently knocks at the door of philosophy,” explains Piero Benvenuti, General Secretary of the International Astronomical Union. “Vienna is also a beautiful city, and we look forward to introducing thousands of astronomers to its magical atmosphere!”

The media is invited to the first press conference press briefing: General information about the Opening Ceremony, which will take place on Monday 20 August at 10:00 CEST.

The participants will include:

In addition to welcoming more than 3000 astronomers from over 88 countries, the conference will also offer several events for the local community, free and open to the public. Highlights include:

General Information on the IAU

The IAU is the international astronomical organisation that brings together more than 12 000 professional astronomers from more than 100 countries worldwide. Its mission is to promote and safeguard the science of astronomy in all its aspects through international cooperation. The IAU also serves as the internationally recognised authority for assigning designations to celestial bodies and the surface features on them. Founded in 1919, the IAU is the world's largest professional body for astronomers. 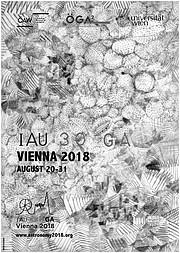