The Gruber Foundation Cosmology Prize, which is co-sponsored by the IAU, honours leading scientists who have made discoveries leading to fundamental advances in our understanding of the Universe. The 2018 prize has been awarded to the scientists and engineers behind the ESA Planck Spacecraft, which measured the matter content and geometry of the universe with unprecedented precision.

The recipients of this year’s Gruber Foundation Cosmology Prize, which is co-sponsored by the IAU, were announced yesterday. The prize is awarded annually to leading scientists and cosmologists who have made groundbreaking discoveries that change or challenge our understanding of the Universe.

The 2018 Cosmology Prize was awarded to the Planck Team and to Jean-Loup Puget and Nazzareno Mandolesi, the leaders of the High Frequency Instrument and Low Frequency Instrument consortia, for mapping the temperature and polarisation of the cosmic microwave background (CMB) radiation using the ESA Planck spacecraft [1].

The three recipients will divide the $500,000 annual award. Mandolesi and Puget, as the principal investigators on the observatory’s two instruments, will each receive $125,000, while the Planck team will receive $250,000. The Prize will be awarded on August 20, at the General Assembly of the International Astronomical Union, in Vienna, Austria. Mandolesi and Puget will also receive a gold medal.

Planck, which was named after the German physicist Max Planck, was launched in 2009 and was operated by the European Space Agency until 2013. During this time, the spacecraft carried out a painstakingly detailed survey of the Universe at microwave and infrared wavelengths. It was decommissioned in 2013, after operating for three more years than originally planned.

The Planck spacecraft measured very small variations in the temperature of the CMB, the oldest known electromagnetic radiation. This omnipresent radiation is a faint relic dating from 380,000 years after the Big Bang, and provides details of the very earliest history of the Universe. Planck’s sophisticated detectors, which were sensitive enough to detect temperature differences of a few millionths of a degree, provided cosmologists with precise measurements of the large-scale properties of the Universe.

This allowed cosmologists to constrain the conjectured “inflationary” phase of the Universe, the infinitesimally brief period immediately after the Big Bang during which the Universe  expanded rapidly. Planck also allowed scientists to determine when the first stars formed, and provided unique information about interstellar dust and magnetic fields in our Galaxy.

The citation of the 2018 Gruber Foundation Cosmology Prize reads:

The Gruber Foundation is pleased to present the 2018 Cosmology Prize to the Planck Team, and to Jean-Loup Puget and Nazzareno Mandolesi, the leaders of the HFI and LFI instrument consortia, for mapping the temperature and polarization of the cosmic microwave background radiation with the ESA Planck spacecraft. Planck measured, with unprecedented precision, the matter content and geometry of the universe, the imprint on the CMB of hot gas in galaxy clusters and of gravitational lensing by large-scale structure, constrained a hypothetical `inflationary' phase, pinned down when the first stars formed, and provided unique information about interstellar dust and magnetic fields in our Galaxy.

[1] The two instruments of the Planck observatory, the High Frequency and Low Frequency Instruments, detected the total intensity and polarisation of photons. The instruments were cooled to a tenth of a degree above absolute zero, and were for three years the coldest known objects in space. 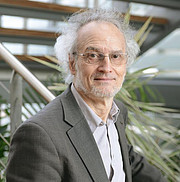