The 2006 General Assembly of the International Astronomical Union (IAU), meeting in Prague ( Czech Republic), has elected the ESO Director General, Dr. Catherine Cesarsky, as President for a three-year period (2006-2009). Dr. Cesarsky is the first woman to receive this high distinction. Dr. Cesarsky has three exciting years ahead of her, especially since 2009 will be the International Year of Astronomy.

The 2006 IAU General Assembly meeting in Prague contained two weeks of passionate discussions: From black holes, dark energy, Near Earth Asteroids, to the most distant galaxies, detection of extra solar planets, confusion limits in the infrared, the definition of a planet and much more. Every celestial object, every concept, every observation, every prediction got scrutinized, debated and refined by the 2500 participating astronomers. At the Closing Ceremony of the 26 th General Assembly the IAU also chose the four new Officers of the Executive Committee for 2006-2009: Dr. Catherine Cesarsky, ESO Director General, as President , Dr. Robert Williams of the Space Telescope Science Institute as President-Elect, Prof. Karel A. van der Hucht of SRON, Netherlands, as General Secretary, and Dr. Ian Corbett, ESO’s Deputy Director General, as Assistant General Secretary.

Prof. Ron Ekers, the outgoing IAU President said: "The past few years have been highly productive for astronomy, with many discoveries giving new insights into our Universe which have excited scientists and general public alike. Catherine Cesarsky is internationally honoured as a scientist, and I am delighted that she has agreed to serve the IAU as President. She has already given invaluable service to the IAU and I am confident that she will provide outstanding leadership as President."

The new President said ”It is a great honour and a pleasure for me to be President of the International Astronomical Union for the next three years, especially in view of the proposed International Year of Astronomy in 2009, in which the IAU will play a leading role as a catalyst and a coordinator. I am very much looking forward to working with my colleagues in the IAU to ensure that this is a great success.”

The International Year of Astronomy in 2009 offers an ideal opportunity to highlight astronomy’s role in enriching all human cultures, to promote astronomy in the developing nations, to inform the public about the latest discoveries, and to emphasize the essential role of astronomy in science education. Individual countries will be undertaking their own initiatives, considering their own national needs, while the IAU will act as coordinator of 2009 International Year of Astronomy on the global scale. The IAU plans to liaise with, and involve, as many as possible of the ongoing outreach and education efforts throughout the world, including those organized by amateur astronomers.

Dr. Cesarsky, ESO Director General since 1999, is known for her successful research activities in several central areas of modern astrophysics. She first worked on the theory of cosmic ray propagation and acceleration, and galactic gamma-ray emission. Later, she led the design and construction of the ISOCAM camera onboard the Infrared Space Observatory (ISO) of the European Space Agency (ESA), and the ISOCAM Central Programme that studied the infrared emission from many different galactic and extragalactic sources. This has led to new and exciting results on star formation and galactic evolution, and in the identification of the sources providing the bulk of the energy in the Cosmic Infrared Background. Dr. Cesarsky is author of more than 250 scientific papers. Dr. Cesarsky received the COSPAR (Committee on Space Research) Space Science Award in 1998 and is member of several renowned national and international Science Academies. She is married and has two children.

Dr. Cesarsky was born in France. She received a degree in Physical Sciences at the University of Buenos Aires and graduated with a PhD in Astronomy in 1971 from Harvard University ( Cambridge, Mass., USA). Afterwards she worked at the California Institute of Technology. In 1974, she moved to France, becoming a staff member of the Service d'Astrophysique (SAp), Direction des Sciences de la Matière (DSM), Commissariat à l'Eénergie Atomique. She then established her career in France. From 1985 to 1993, she was the Head of SAp. Later, as Director of DSM (1994 - 1999), she lead about 3000 scientists, engineers and technicians active within a broad spectrum of basic research programmes in physics, chemistry, astrophysics and earth sciences.

The IAU is the international astronomical organisation that brings together almost 10,000 distinguished astronomers from all nations of the world. Its mission is to promote and safeguard the science of astronomy in all its aspects through international cooperation. The IAU also serves as the internationally recognized authority for assigning designations to celestial bodies and any surface features on them. Founded in 1919, the IAU is the world’s largest professional body for astronomers. The IAU General Assembly is held every three years and is one of the largest and most diverse meetings on the astronomical community’s calendar. 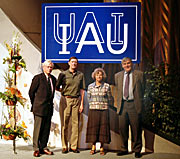