Meeting on Dark and Quiet Skies for Science and Society
The IAU, UNOOSA and the IAC to hold webinar or face-to-face meeting on the protection of the sky for astronomy and human heritage
Click to Enlarge

As previously announced, the United Nations Office for Outer Space Affairs (UNOOSA) and the Government of Spain are arranging a meeting entitled Dark and Quiet Skies for Science and Society, in endorsement of a proposal made by the International Astronomical Union (IAU). The event will be hosted by the Instituto de Astrofísica de Canarias (IAC). The meeting is scheduled for 6–9 October and will either be held as an online webinar or, if COVID-19 travel restrictions are lifted, as a face-to-face meeting in Santa Cruz de La Palma, Canary Islands, Spain. A decision for this will be made in July.

Owing to the special nature of this meeting and its purpose of achieving an international agreement on the protection of the astronomical sky in the shortest possible time, it is important that it take place in the planned time frame.

In the recent past, several similar events have been organised with the aim of analysing the threat of light and radio pollution to astronomy and the visibility of the pristine night sky. In particular, the meeting organised in 2017 in La Palma, on the 10th anniversary of the Starlight Declaration, approved a number of recommended resolutions. An additional focus of the meeting in October will be the impact of satellite constellations on astronomy.

In order to facilitate the effective implementation of its recommendations, the event will produce a document that describes the measures that governments and private enterprises can adopt to mitigate the negative impact on astronomy of technological developments (e.g., urban lighting, radio broadcasting and the recent deployment of large satellite constellations), without diminishing the effectiveness of the services they offer to citizens. The final document will be presented to the UN’s Committee on the Peaceful Uses of Outer Space (COPUOS) for approval, to become a reference for regular future analysis of the situation.

The involvement of COPUOS is particularly important, since it is the natural international forum through which these matters should be brought to the attention of the world’s governments.

More information, including deadlines, the registration form and details on application for financial support, can be found on the dedicated website. Given the special nature of the meeting, the maximum number of face-to-face participants has been set at 150.

The IAU is the international astronomical organisation that brings together more than 13 500 professional astronomers from more than 100 countries worldwide. Its mission is to promote and safeguard astronomy in all its aspects, including research, communication, education and development, through international cooperation. Reduction and prevention of artificial sky glow and radio-frequency interference is a priority goal of the IAU.  Commission B7 was established on the basis of its proposal to address these critical issues. The IAU also serves as the internationally recognised authority for assigning designations to celestial bodies and the surface features on them. Founded in 1919, the IAU is the world's largest professional body for astronomers.

The Instituto de Astrofísica de Canarias (IAC) runs two observatories, in Tenerife and La Palma, and is committed to preserving "Dark and Quiet Skies" for the benefit of society and of the astronomical community. 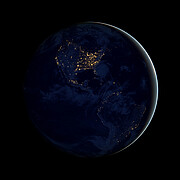