OSIRIS-REx is NASA’s first mission to bring a sample from an asteroid back to Earth. The OSIRIS-REx spacecraft has been mapping Bennu’s surface since its arrival on 3 December 2018, looking for a site from which to take a sample. Bennu is the smallest body in the Solar System to be orbited and surveyed by a spacecraft at close range.

The named features on Bennu will include several terrain classification types that the IAU also approved for asteroid (162173) Ryugu’s surface features (currently being explored by the Japanese Space Agency’s Hayabusa 2 spacecraft). These include craters, dorsa (peaks or ridges), fossae (grooves or trenches) and saxa (rocks and boulders). The last of these types – saxum – is a new feature classification that the IAU introduced earlier this year for small, rocky asteroids like Ryugu and Bennu. These surface features on Bennu will be named after mythological birds and bird-like creatures, complementing the mission’s existing naming theme, which is rooted in Egyptian mythology.

The name OSIRIS-REx is an acronym for the mission’s major concepts and goals, which stands for Origins, Spectral Interpretation, Resource Identification, Security-Regolith Explorer. The name also finds inspiration in the Egyptian myth of the god Osiris. In ancient Egyptian mythology, Osiris is associated with the afterlife, the underworld and rebirth. He granted all life, including sprouting vegetation and the fertile flooding of the Nile River. Similarly, the OSIRIS-REx mission seeks to understand the origin and process of life on Earth by studying Bennu’s carbon-rich regolith.

Bennu was named in 2013 by a 9-year-old boy from North Carolina who won the Name that Asteroid! Competition, a collaboration between the mission, the Planetary Society, and the LINEAR asteroid survey that discovered Bennu. Michael Puzio won the contest by suggesting that the spacecraft’s Touch-and-Go Sample Mechanism (TAGSAM) arm and solar panels resemble the neck and wings in illustrations of Bennu, whom ancient Egyptians usually depicted as a grey heron. Bennu is the ancient Egyptian deity linked with the Sun, creation and rebirth — Puzio also noted that Bennu is the living symbol of Osiris. The myth of Bennu suits the asteroid itself, given that it is a primitive object that dates back to the creation of the Solar System. Themes of origins, rebirth and duality are all part of this asteroid’s story. Birds and bird-like creatures are also symbolic of rebirth, creation and origins in various ancient myths.

The process of naming of Bennu’s surface and features will begin this summer. The OSIRIS-REx team is scheduled to begin detailed reconnaissance on candidate sample sites this autumn. Sample collection is scheduled for summer 2020, and the sample will return to Earth in September 2023.

NASA’s Goddard Space Flight Center in Greenbelt, Maryland provides overall mission management, systems engineering, and the safety and mission assurance for OSIRIS-REx. Dante Lauretta of the University of Arizona, Tucson, is the principal investigator, and the University of Arizona also leads the science team and the mission’s science observation planning and data processing. Lockheed Martin Space in Denver built the spacecraft and is providing flight operations. Goddard and KinetX Aerospace are responsible for navigating the OSIRIS-REx spacecraft. OSIRIS-REx is the third mission in NASA’s New Frontiers Program, which is managed by NASA’s Marshall Space Flight Center in Huntsville, Alabama, for the agency’s Science Mission Directorate in Washington. 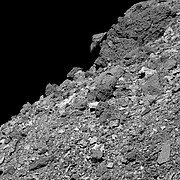