The IAU has formally adopted names for three important Lunar features associated with the Apollo missions. Originally unofficial nicknames given by the Apollo astronauts to notable Lunar features used as landmarks for the Apollo 11 landing, the names of Mount Marilyn, Little West, and Double have now been added to the official database.

Mount Marilyn, lying near the eventual landing site on the Sea of Tranquility (Mare Tranquillitatis), was first identified by the Apollo 8 Astronaut James Lovell, who named it after his wife. It subsequently became a significant landmark for the momentous landing by Apollo 11 in 1969. The importance of this lunar feature to the success of the landing is now recognised by the IAU’s official adoption of the name Mount Marilyn. Mount Marilyn did not have an official name for the last 44 years. The feature was formerly named Secchi Theta by IAU Commission 17 in 1932. But in 1973, Greek letters for elevations on the Moon were phased out by the IAU, and the feature that had been known as Secchi Theta no longer had an official name.

Other landmarks used by the astronauts were nicknamed Little West and Double, and these names too have now been officially adopted. 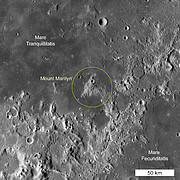