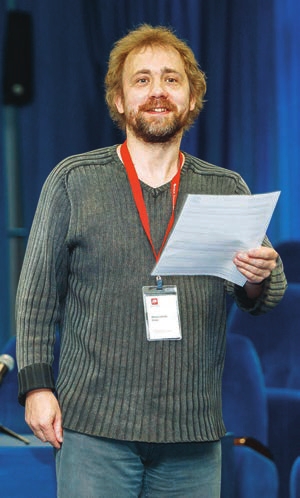 On April 5, 2020, at the 56th year of his life, the famous Russian radio astronomer, doctor of Physics and Mathematics, Leading Researcher of the Special Astrophysical Observatory of RAS, Header of the Group for study of galaxies and cosmology Oleg Vasilievich Verkhodanov suddenly died of a heart attack.

He was born on March 17, 1965 in the city of Novgorod (now - Veliky Novgorod). In 1982-1987, Oleg studied at the Leningrad State University (now St. Petersburg State University). From 1987 until his last days, he worked at the Special Astrophysical Observatory of the Academy of Sciences of the USSR (since 1991 - SAO RAS); in 1989-1993 he studied at the part-time doctoral program of SAO RAS under the supervision of Yu.N. Parijsky, the member of the Academy of Sciences. In 1993, Oleg V. Verkhodanov passed his Ph.D. defense on “Methods of investigation of radio sources in the near-zenith mode of RATAN-600.” In 2002-2004, he held the position of a Visiting scientist at the Theoretical Astrophysics Center (Copenhagen, Denmark). In 2005, he defended his doctoral thesis “Methods and results of observational radio cosmology.” Oleg was an active member of the International Astronomical Union.

Oleg V. Verkhodanov was a brilliant scientist and a wonderful educator - he systematically gave lectures for students and schoolchildren, organized scientific schools and conferences, supervised graduate students, and helped them start an independent scientific activity. He was the main organizer of astrophysical schools and olympiads of school students organized by SAO RAS, including the first astrophysical school “Traectoria” of the Traectoria Foundation (2016-2019). Oleg independently and in collaboration with his colleagues has published more than 200 scientific papers in up-to-date research areas of observation radio astronomy and cosmology. He was the author and scientific editor of several books, a number of scientific and popular science papers on the general problems of radio astronomy, research on radio galaxies and CMB. In recent years, Oleg gave more than 50 public lectures annually, participated in discussions on relevant issues of modern astronomy.

Oleg V. Verkhodanov in collaboration with Yu.N. Parijsky, the member of the Academy of Sciences, published the monograph “Radio galaxies and cosmology” (2009). It was mainly devoted to the observational data interpretation including the results of many years of research on radio galaxies within the “Big Trio Project” carried out jointly with the RATAN-600 radio telescope, the 6-m BTA telescope of SAO RAS, and the VLA NRAO radio interferometer (USA). An important result of this review is the discovery of one of the most distant radio galaxies in the Universe, RCJ0311+0507, at the redshift of z=4.514 containing a supermassive black hole in the nucleus.

Oleg V. Verkhodanov developed the software package to analyze the surveys and discrete radio sources observational data at the RATAN-600, explored the possibilities of this telescope as a co-phased array, developed phase analysis algorithms and the GLESP software (co-authored) based on his new sky-pixelization method for high-precision studies of CMB radiation on the whole sphere. Together with his colleagues, he discovered the non-Gaussianity of the first experimental CMB map which was subsequently confirmed by other authors, and proved that it is due to the Galaxy radio emission contribution, estimated the ages of distant radio galaxies, showed their agreement with the standard cosmological LCDM model. Oleg V. Verkhodanov studied the contribution of radio galaxies of different populations to the cosmic microwave background, created new catalogs of radio sources, proposed a method for estimating the average continuum radio spectra for quasars in different cosmological epochs to identify their possible distortion due to the number of mergers and “ignition” of radio sources, and their own evolution.

Oleg’s contribution to radio astronomy research is invaluable. He was an observer, theorist, mathematician, programmer, and teacher. Oleg V. Verkhodanov created several unique software packages for working with the radio astronomy data; they are used by observers and theorists. Under his direct supervision, the CATS astrophysical catalog support system has been created and developed; it is actively used by the world astronomical community. Using the developed instruments, he conducted cross-identification of hundreds of thousands of sources in various wavelength ranges.

The works of Oleg V. Verkhodanov have been repeatedly awarded. He was a laureate of the “Outstanding Scientists. Ph.D. and Doctors of Sciences of the Russian Academy of Sciences” (2008-2009) program of the Support of Domestic Science Foundation, laureate of the Dmitry Zimin Dynasty Foundation Prize (2010-2012) within the support program for young physicists - Doctors of science, winner of the “Best reviews and articles published in Uspekhi Fizicheskikh Nauk [Physics – Uspekhi] (UFN) journal in 2016” competition with his paper “Cosmological Results of the Planck Space Mission. Comparison with WMAP and BICEP2 Experimental Data.”

Oleg V. Verkhodanov was a productive scientist in the field of analysis and modeling of experimental data of the CMB and radio cosmology measurements. The whole astronomical community will remember Oleg as a deep researcher who has done exceptionally much for the Russian radio astronomy, and whose works will be included in the golden fund of the world astrophysics. Once Oleg said: “All people in childhood look at the starry sky and admire, but not all remain. I remained…” And this is indeed true - he stays and will remain in our hearts forever.