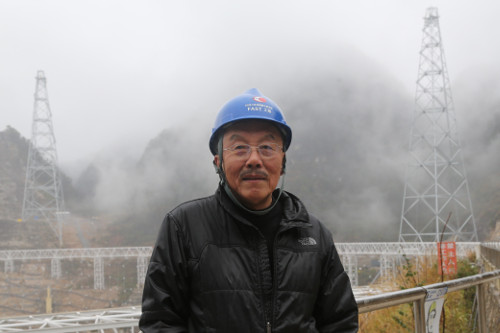 Rendong Nan was born on 19 February 1945 in Jilin province, northeastern China. He received his Bachelors degree in ultra-high frequency and electronic technology at Tsinghua University in 1968, and his MSc and PhD in Astronomy and Astrophysics at University of Science and Technology of China in 1982 and 1987 respectively.

From 1968 to 1978, Rendong was a worker and a technician in Tonghua Electronic Factory in Jilin Province. Following this period, he became an assistant researcher at Beijing Astronomical Observatory (BAO) of the Chinese Academy of Sciences (CAS) from 1982-1984. He played an important role in the Miyun Synthesis Radio Telescope (MSRT) located in Miyun county north of Beijing, contributing to its Direct Fourier Transform hardware, receivers, system calibration and data analysis.

Starting in 1985, he spent a number of years outside China visiting the Netherlands Foundation for Radio Astronomy, the Institute of Radio Astronomy in Bologna, Italy, Nobeyama Radio Observatory in Japan, Jodrell Bank Observatory in the UK, University of Calgary in Canada, and NRAO in the United States as a foreign scholar or a guest professor. From 1989 to 1992, he was an associate professor at BAO, and a member of the European team studying a sample of 3CR Compact Steep Spectrum radio sources using international VLBI facilities at multiple-wavelengths. In 1992 he became a professor at BAO.

After the LT Working Group (Large Telescope, renamed as Square Kilometre Array in 1999) was proposed at the 1993 URSI General Assembly in Kyoto, Rendong, together with colleagues Bo Peng, Yuhai Qiu, and Shengyin Wu (who passed away 10 years ago), formed a research group at BAO in 1994 to initiate and promote the Chinese SKA concept KARST (Kilometre Area Radio Synthesis Telescope) - an array of large aperture spherical antennas in southern China. In 1997-1998, the FAST (Five-hundred-meter Aperture Spherical radio Telescope) concept was initiated as the KARST forerunner. Rendong played the key role in directing the Chinese efforts for the SKA and then the R&D for the FAST project. After 13 years of pre-research together with about 20 domestic partners, e.g., Remote Sensing Institutes of CAS, Xidian University, Tsinghua University, etc., the funding proposal for FAST was finally approved on July 10 2007 by the Chinese NDRC (National Development and Reform Committee). Rendong served as the Chief Engineer and later the Chief Scientist for the construction project. His vision and wisdom were vital to the FAST project achieving technical and scientific success, especially on the technically-challenging cable-net structure of its active reflector.

The construction of the giant dish was completed successfully in September 2016 as one of the Mega-Science Facilities in China. It is the world’s largest single dish, a landmark on Earth.

Rendong served as the Deputy Director of BAO from 1993 to 1998, Director of Beijing Astronomical Society from 1993-1996, a member of the Committee on the Search for Extraterrestrial Intelligence in the International Academy of Astronautics from 1996-1999, the vice-president of Commission 40 and Division X of International Astronomical Union (IAU) from 2003-2006, and President from 2006 to 2009. He passed away from lung cancer on September 15, 2016, in the USA. Rendong Nan will be remembered personally as an engaging and gifted person, and professionally as a scientific and engineering leader who led the successful completion of FAST, a unique facility for Chinese and world astronomy.