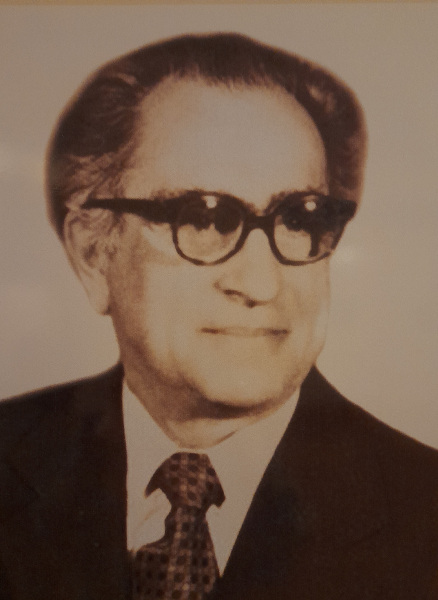 Alexander Solomonovich was born in Liepae on 31 December 1916, and raised in the family of a mining engineer and a doctor. After graduating from school in 1934, he entered the Physics Department of Moscow State University, from which he successfully graduated in 1939. The results of his diploma work, devoted to the study of dry friction forces, formed the basis of his first scientific paper that was published in the same year. However, immediately after graduation, he was called up for military service and sent to the Trans-Baikal Military District, where he served for several years. Only at the beginning of 1944, the division in which Salomonovich served was transferred to the European sector of hostilities. By the end of the war A.E. Salomonovich had the rank of captain, having received the Order of the Red Banner and three medals for personal courage.

In 1945 A.E. Salomonovich was discharged from the army, returned to Moscow, where his family lived, and entered the Lebedev Physical Institute's (LPI's) graduate school under his former teacher S.E. Khaikin. During his postgraduate studies, Alexander Efimovich carried out radiophysical studies of the electrical and mechanical ferroresonance phenomena, which formed the content of his Ph.D "Dry friction and electrical contact at small displacements," that he successfully defended in 1949.

Since 1948, Salomonovich turned completely to radio astronomy and became one of the main assistants to S.E. Khaikin, head of the LPI group of radio astronomers. In 1949 A.E. Salomonovich was appointed head of the Crimean LPI expedition, where the main base for radio astronomical research in the USSR began to be created. Many of the first radio telescopes were based on large military radar antennas. The first of the large full-steerable radio telescope in Crimea was also constructed on the basis of the "Great Würzburg" radar with a main mirror diameter of 7.5 m. In the shortest possible time, already in May 1949, A.E.Salomonovich together with members of his team had delivered to Mount Koshka (near Simeiz, Crimea) all the devices and parts necessary for the modernization and installation of the up-graded antenna. And in a few months the new radio telescope was ready for use in scientific observations. Due to the large effective area of the antenna and the high sensitivity of the installed receivers, the study of refraction in the atmosphere (the main applied work of that time) was carried out not only in the daytime by observations of the Sun, but also by observing the Moon in nighttime. Observations of the Moon at the record-short (for that time) wavelength of 10 cm were also used to determine the physical parameters of the lunar surface.

Since the beginning of the 1950s, A.E. Salomonovich had completely switched over to the problems of increasing the sensitivity of receivers and creating instruments for research in the short radio waves range (λ < 3 cm). The first such observations of the Sun and Moon were made at a wavelength of 8 mm using a reflector antenna with a diameter of 2 meters installed in Krasnaya Pakhra (now Troitsk, Moscow region). These observations made it possible to measure the brightness temperature of the Sun and the dependence of the slowly varying component on the solar activity index, as well as to detect the phase behavior of the brightness temperature of the Moon.

Closer to the mid-1950s, Alexander Efimovich was already completely immersed in the problems of creating a large full-rotation radio telescope for the millimeter wave range with a main mirror diameter of 22 meters. By the beginning of 1956, the scientific supervisor A.E. Salomonovich, together with the chief designer and developer of the telescope, Pavel Dmitrievich Kalachev, had already completed the preliminary design of such a telescope. This made it possible to prepare and adopt a Decree of the Government of the USSR dated 11 April 1956, allowing the USSR Academy of Sciences to build on the right bank of the Oka river (on the place of the future scientific town Pushchino) of the LPI Radio astronomy station and install a radio telescope on the territory of this station.

Thanks to the coordinated work of the entire team headed by Salomonovich, a unique radio telescope with an angular resolution of 2 arc minutes at a wavelength of 8 mm was built in less than 3 years, and in April 1959 the first observations were made with it. In the 1960s, A.E. Salomonovich supervised all the work carried out on the RT-22 to study the radio emission of the Sun and the Moon, took part in the observations of discrete radio sources and planets, and in 1964 he ensured successful observations by R.L. Sorochenko and his team, which led to the discovery of radio recombination lines emitted by highly excited hydrogen atoms.

The rich experience in adjusting and measuring the parameters of the RT-22 was reflected in the well-known monograph by A.D. Kuzmin and A.E. Salomonovich "Radio astronomical methods for measuring antenna parameters," published in 1964 [1] and later translated into English and also published in the USA [2]. Also 1964, A.E. Salomonovich successfully defended his doctoral thesis, the basis of which were his investigations, already performed on the RT-22 radio telescope.

By the mid-1960s, A.E. Salomonovich became more and more interested in the problem of creating highly sensitive radiometers and spectrometers operating in the submillimeter range. Since 1965, he no longer worked in the laboratory of radio astronomy, but in the laboratory of spectroscopy of the same LPI, where he created his own group, and a little later, the sector for submillimeter studies. The developed equipment was initially intended for use on board of high-altitude balloons, later tests were already carried out on geophysical rockets, automatic satellites, and, finally, on the "Salyut-6" manned orbital station. To cool the receivers to their operating helium temperatures, the unique onboard cryostats were created by Salomonovich's team for submillimeter telescopes operating in zero gravity. Using the radiometer "Obzor" on the artificial Earth satellite "Kosmos 669" in 1974, a map of the Earth as a planet was compiled in the wavelength ranges of 0.1 and 0.5 mm. Under the leadership of A.E. Salomonovich, the ozonometric complex of the LPI was created, and since 1987 regular measurements of the ozone layer at the wave of the 2.2 mm rotational spectral line of ozone began.

Alexander Efimovich considered it important to popularize the scientific ideas he developed. One of his last popular articles was written jointly with R.L. Sorochenko and was devoted to the discovery of recombination radio lines (published in the Soviet journal "Priroda" in 1987, [3]). Under his editorship and with active participation as one of the authors of a number of articles, two monographs were published: "Essays on the history of radio astronomy in the USSR" (Kyiv, 1985, [4]) and "Development of radio astronomy in the USSR" (Moscow, 1988, [5])

The outstanding achievements of A.E. Salomonovich in domestic science were awarded the Prize of the Presidium of the USSR Academy of Sciences (1977), the Order of the Red Banner of Labor II degree (1978) and the State Prize of the USSR (1988). He never said that this or that researcher was his pupil, but many of those who knew him rightly consider themselves to be his pupils and followers.

Salomonovich died in Moscow on 8 March 1989.