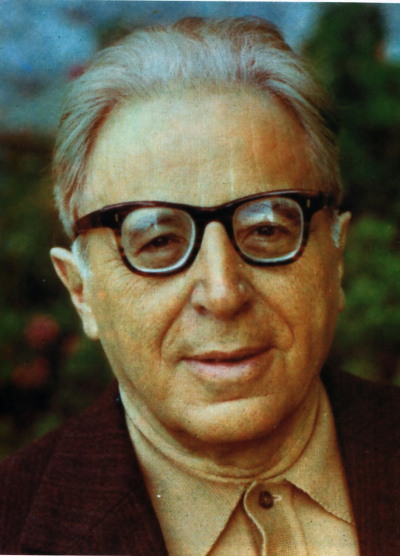 Iosif Samuilovich Shklovsky, a man who had a significant and often decisive influence on modem astrophysics was born in the town of Glukhov in Ukraine, then a part of the Russian Empire, on 1 July 1916. In 1933 he entered the physics-math department of the Vladivostok University and two years later transferred to the physics department of the Moscow State University (MSU). In 1938, the young physicist, specialized in optics, was accepted as a graduate student by the astronomy department of MSU, also known as the P.K. Sternberg State Astronomical Institute (GAISh), an institute with which he was to be associated for the rest of his life. Then, at the start of the war in 1941, he was evacuated to Ashkhabad. Because of his poor eyesight he did not serve in the Soviet army. After the return of GAISh to Moscow in 1944, Shklovsky spent many years at the leading edge of the post-war revolution in astronomy.

The post-WWII forty years have been characterized by an unprecedented development of observational methods and technology in radio as well as infrared, ultraviolet, X-ray, and gamma­ray astronomy. New classes of objects were discovered: radio stars, radio galaxies, quasars, infrared sources, pulsars, cosmic ray bursters, gamma-ray bursts, various flavors of cosmic background radiation at all wave-lengths, and, in particular, the microwave radio background radiation (often called in Russian, after Shklovsky, “relic radiation”). The question "What is this?" according to Shklovsky, was the main question of astronomy. He was one of the first astronomers to recognize the necessity of studying any astronomical object at all wavelengths of the electromagnetic spectrum. Only in this way can one hope to construct a proper model and understand the object's nature. This is the main testament that Shklovsky left to future researchers.

Shklovsky devoted his candidate's (PhD, 1944) and doctoral (1949) dissertations to the physics of the solar corona. His first work concerning solar ultraviolet and radio-wave radiation appeared in 1946, at a time when rocket astronomy in the high energy part of the spectrum and radio astronomy in the long wavelength region were making their first steps. His study of galactic radio emission appeared 1947. In that same year he participated in an expedition to observe the total solar eclipse in Brazil, the first such expedition to be equipped with a radio telescope. Beginning in 1950, Shklovsky took part in the first infrared observations using an image converter. His pioneering work, Galactic Infrared Radiation, was published in 1953.

At MSU during the winter of 1952-53, Shklovsky gave one of the world's first set of lectures entitled “Radio Astronomy.” His audience included not only students, but also many researchers from various institutes. In his lectures, Shklovsky revealed a new world. Radio waves are emitted not only by radio stations, but by practically all astronomical objects in the Universe. The Sun, Moon, planets, stars, galaxies, and other as yet unknown sources are sending radio signals, the nature of which is strongly coupled with the unusual physical processes taking place within these objects. This radiation allows one to determine the most important parameters of those regions where the radio waves are being generated. Shklovsky understood that new observational methods were needed if astrophysics was to master the new spectral bands. For this reason, in 1953 Shklovsky created a new Department of Radio Astronomy at GAISh which soon became an "all wavelength" department.

From the very beginning, that is starting in 1957, Shklovsky took an active part in establishing and developing space research in the USSR. He understood that only through such research could astronomy truly extend to all wavelengths. In the autumn of 1959, the Soviet Union's second lunar probe released a sodium cloud, thus creating an experimental "artificial comet.” Solar rays acted on the sodium atoms and caused them to produce a resonance fluorescence that could easily be observed and studied from the Earth. At first, these experiments served as a satellite location indicator, but later they were used to study the characteristics of the interplanetary medium and the upper layers of the earth's atmosphere. These experiments, developed by Shklovsky and his students, simulated a process already familiar to him from the physics of the interstellar medium. In 1960, he was awarded the Lenin prize in science, the highest honor for science achievement in the USSR, for his "artificial comet" experiment.

In 1966 Shklovsky was elected a Corresponding Member of the USSR Academy of Sciences, and in 1967 he formed the Department of Astrophysics at the Academy's newly created Space Research Institute. The Department included laboratories studying the cosmos throughout the entire electromagnetic spectrum. Almost all of Shklovsky's works rely, first and foremost, on observational data and contain new, well-defined physical ideas. Typically he would develop a theory to that level needed to calculate the theory's probable effects and evaluate the possibility of verifying these effects observationally. Shklovsky was one of the first astronomers to analyze the fundamental connection between physical processes that determine the properties of radiation which are characteristic in different regions of the spectrum. In this way, he created the modern theory of the solar corona. Later he carried out a detailed investigation of the spectra of galactic and extra-galactic radio sources and identified regions of ionized gas and regions with relativistic electrons.

Shklovsky' s work explaining the radiation in the radio and optical spectrum of the Crab Nebula via a single mechanism, synchrotron emission, and an analogous work concerning the radio galaxy Virgo A, were particularly significant. He carried out another work of fundamental significance when he studied the background radio radiation left over from the epoch when the Universe was in a super-dense state. This work, which was performed less than a year after the discovery of the microwave background radiation, explained the anomalous high intensity of the optical interstellar CN spectral lines as a result of the background radio radiation acting on the CN molecules. In this way, he proved that the background radiation truly does extend beyond the boundaries of the solar system.

Shklovsky's development of a new method to determine the distance to planetary nebulae and his determination of the fundamental physical parameters of these nebulae were especially important. This was the work that evidently caused him to think about the variability of radio sources formed during powerful explosions. In his last years Shklovsky returned to the problem of planetary nebulae. He proposed a hypothesis according to which the nuclei of these nebulae might be stars in a pre­supernova state. Cooling, they lose stability, which might lead to a Type I supernova explosion. He devoted an extensive series of studies to the physics of explosions of supernovae, galactic nuclei, and quasars. He also studied the characteristics of the gas clouds and relativistic particles formed during such explosions. According to his hypothesis, the asymmetry of these explosions explains the high velocities of pulsars and the fact that old neutron stars must form an extended halo around galaxies. It is possible that as yet unidentified sources of gamma-ray impulses are associated with these objects. Such explosions in galactic nuclei could lead to the ejection of super-massive black holes.

Another important theme connected with Shklovsky is the development of spectral line studies in radio astronomy. In 1948, based on the pioneering work by the Dutch astrophysicist H. van de Hulst, he computed the intensity of the 21-cm line of atomic hydrogen, the main component of the interstellar medium, and in contrast to van de Hulst, he showed that it could be detected. He also foresaw the possibility of observing many molecules in the interstellar medium. The four hydroxyl lines (OH) near 18-cm, predicted by Shklovsky, were detected ten years later, and the CH line seventeen years later. He proposed a hypothesis by which molecular line radiation might be anomalously high in those regions of the Galaxy where young stars and planetary systems are being formed. These ideas also defined one of the themes of modem astrophysics.

Shklovsky also played a great role in providing philosophical interpretations of the latest achievements in modem science, including astrophysics, and the related problems of extraterrestrial civilizations, man's role in the cosmos, and his role in transforming the Universe. He was able to expound only a small part of his views on these problems in a series of articles and in his widely known book The Universe, Life, Intelligence, first published in 1962 with the assistance of the influential President of the Soviet Academy of Sciences M.V. Keldysh. As of the second decade of the 21st century, only in Russian, this book amassed 8 editions.

Shklovsky's great talent as an lecturer and philosopher, the originality of his thoughts, and the simplicity of their presentation, his temperament as an speaker and his goodwill toward those thirsting for knowledge, his numerous appearances before both specialists and the general public - all of this gained him both great fame and recognition. His characteristic traits as a scientist were his limitless interest in the facts, his quest for the essentials, his striving for simplicity in understanding the phenomena of nature, and his talent for always being on the leading edge of research. He created a school of contemporary evolutionary astrophysics that encompasses the entire spectrum. Astronomers in the USSR and elsewhere have been greatly influenced by Iosif Shklovsky.

Above all, Shklovsky was a very inspirational character, always fountaining with new ideas and energizing everybody around. Once, one of the authors of this article said to him while visiting him in hospital: "Iosif Samuilovich, you are destroying your nerves over trivia! Protect your health!". "I can only be in one of two states," answered Shklovsky, "Either alive, as you all know me, or not. I know of no other states.".

* Adapted from the English translation of “The Shklovsky Phenomenon” (in Russian) by N.S. Kardashev and L.S. Marochnik. which appeared in Priroda, 1986, 6, pp. 84-95. The English translation by Robyn McCutcheon appeared in Astronomy Quarterly, 1990, 7, pp. 219-242 and has been edited and reproduced here by L. Gurvits and K. Kellermann with the permission of L.S. Marochnik and Robyn McCutcheon.