2018 Kavli Prize in Astrophysics Awarded to IAU President-Elect
Ewine van Dishoeck, President-Elect of the International Astronomical Union (IAU), has been awarded the Kavli Prize for her contribution to understanding the Universe at the largest scales
Click to Enlarge

The Kavli Prize is awarded every two years to scientists who have made pioneering advances in astrophysics, nanoscience and neuroscience — furthering our understanding of existence at the largest, smallest and most complex scales. The 2018 Kavli Prize for astrophysics has been awarded to Ewine van Dishoeck, for her pioneering work in observational, theoretical, and laboratory astrochemistry, shedding light on the chemistry of interstellar clouds and the formation of stars and planets. This is only the second time that a Kavli Prize, in any category, has been awarded to a single recipient.

Molecules are one of the vital ingredients of our Universe — as well as being essential for life, they play key roles in the physical processes underlying star and planet formation. As recently as the 1960s, scientists believed that interstellar gas consisted primarily of individual atoms, with only a smattering of simple molecules dispersed. Since then, our understanding of the intricacies of cosmic chemistry has been revolutionized. Among the many scientists and engineers who have contributed to this revolution, one researcher in particular, Ewine van Dishoeck, stands out.Ewine van Dishoeck studied chemistry at Leiden University before switching to the field of astrochemistry. She completed her PhD at Leiden on the topic of molecules within interstellar gas clouds, and proceeded to become a scientific leader in the field of astrochemistry. Her contribution to all facets of astrochemical research has been recognised with 2018 Kavli Prize in Astrophysics, which was announced from Oslo, Norway and streamed to the World Science Festival in New York City this afternoon.

Ewine van Dishoeck has led the transformation of astrochemistry into a growing, quantitative discipline. Throughout her research career, Ewine van Dishoeck and her collaborators made landmark contributions to our understanding of the formation and destruction of interstellar molecules. “Professor Van Dishoeck's research on the chemistry of the universe has transformed virtually every aspect of the subject. She has advanced a subject that was once regarded as a small activity on the fringes of mainstream astrophysics, and brought it to the forefront of astronomy as a whole,” said Robert Kennicutt, member of the astrophysics prize committee.

Through laboratory experiments, Ewine van Dishoeck’s group has developed a richer understanding of the chemical processes that govern the growth and evolution of interstellar ices. Their studies allow modelling of key steps in the evolution of molecular clouds and the subsequent formation of stars, protoplanetary disks, and planets. Outside the laboratory, Ewine van Dishoeck and her colleagues have masterfully exploited the most capable astronomical measurement techniques available. Recently, she has used the first truly international astronomical observatory, the Atacama Large Millimeter and sub-millimeter Array (ALMA) in Chile to provide the first view of dust traps in disks around young stars, constraining planet formation theories through observation.

In addition to her many achievements as a researcher, Ewine van Dishoeck has been a prominent scientific leader during her career. She coordinated a programme to study water molecules in a wide range of protostars using ESA’s Herschel Space Observatory and she has held a number of key positions overseeing development of the ALMA observatory. The experience gained in convincing scientists from many different nations to work together on ALMA may well prove invaluable when Ewine van Dishoeck takes up the post of President of the IAU next year.

Ewine van Dishoeck will receive a USD $1 million prize and a gold medal presented in Oslo, Norway, during a ceremony presided over by His Majesty King Harald. A banquet will take place at Oslo’s City Hall, the venue of the Nobel Peace Prize ceremony. The citation reads:

“For her combined contributions to observational, theoretical, and laboratory astrochemistry, elucidating the life cycle of interstellar clouds and the formation of stars and planets.”

The award ceremony will take place in Oslo on the 4th of September. 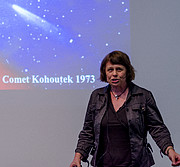 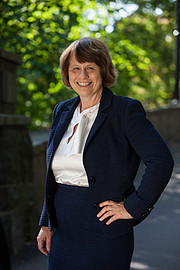