The International Year of Astronomy 2009 Closing Ceremony: Save the Date
Click to Enlarge

On 9 and 10 January 2010 the International Year of Astronomy 2009 (IYA2009) will be brought to an official close with a ceremony to be held in Padova, Italy, in the Aula Magna of the University of Padova, where Galileo taught experimental physics and astronomy. The final event of this global celebration of astronomy and its contribution to society and culture will be attended by the key figures behind IYA2009 as well as prominent astronomers. The press is invited to attend.

IYA2009 was launched by the International Astronomical Union (IAU) and UNESCO under the theme “The Universe, Yours to Discover”. IYA2009 marked the 400th anniversary of Galileo Galilei’s first astronomical observation through a telescope in 1609, an event that changed the world forever. Many thousands of individuals in over 148 countries around the world have been involved, forming the world’s largest ever astronomy network. IYA2009 has shown astronomy as a truly global scientific endeavour that unites astronomers in an international, multicultural family of scientists, working together to find answers to some of the most fundamental questions that humankind has ever asked.

The IYA2009 Closing Ceremony concludes one the world’s grandest science popularisation ventures, but also hails the beginning of a new era: Beyond IYA2009. The IYA2009 legacy programme, which will be launched during the IYA2009 Closing Ceremony, will foster continued cooperation and will aim to sustain the enduring network, activities and innovative concepts for education and public outreach in astronomy which have been shown to be successful in IYA2009.

Several  initiatives have been planned in parallel with the IYA2009 Closing Ceremony, including a 4 days event (from 7 to 10 January) celebrating the exact 400 years anniversary of Galileo’s groundbreaking observations of Jupiter and its moons and a magnificent exhibit with one of the original Galileo’s telescope.

A strong media presence is anticipated at the IYA2009 Closing Ceremony, given the importance of the event to modern astronomy.

Phone and e-mail interviews can be arranged with some of the key speakers. For media accreditation, requests for interviews and more information please contact Mariana Barrosa, IYA2009 Coordination Assistant.

The International Year of Astronomy 2009 Closing Ceremony is hosted by the University of Padova,  organised by INAF (National Institute for Astrophysics), IAU and UNESCO, under the High Patronage of the President of the Republic of Italy and several  Italian institutions and academies, particularly the Accademia dei Lincei of which Galileo was one of the first members. 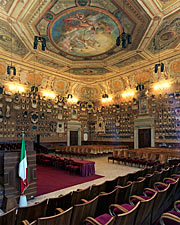