The International Year of Astronomy 2009 (IYA2009) celebrates the first astronomical use of the telescope by Galileo – a momentous event that initiated 400 years of astronomical discoveries and triggered a scientific revolution which profoundly affected our worldview. Now telescopes on the ground and in space explore the Universe, 24 hours a day, across all wavelengths of light. The President of the International Astronomical Union (IAU) Catherine Cesarsky says: "The International Year of Astronomy 2009 gives all nations a chance to participate in this ongoing exciting scientific and technological revolution."

The IYA2009 will highlight global cooperation for peaceful purposes – the search for our cosmic origin and our common heritage which connect all citizens of planet Earth. For several millennia, astronomers have worked together across all boundaries including geographic, gender, age, culture and race, in line with the principles of the UN Charter. In that sense, astronomy is a classic example of how science can contribute towards furthering international cooperation.

The IYA2009 is, first and foremost, an activity for the citizens of planet Earth. It aims to convey the excitement of personal discovery, the pleasure of sharing fundamental knowledge about the Universe and our place in it, and the merits of the scientific method. Astronomy is an invaluable source of inspiration for humankind throughout all nations. So far 99 nations and 14 organisations have signed up to participate in the IYA2009 – an unprecedented network of committed communicators and educators in astronomy.

For more information on the International Year of Astronomy 2009 please visit the website at www.astronomy2009.org

The vision of the IYA2009 is to help the citizens of the world rediscover their place in the Universe through the day and night time sky – and thereby engage a personal sense of wonder and discovery. All humans should realize the impact of astronomy and basic sciences on our daily lives, and understand better how scientific knowledge can contribute to a more equitable and peaceful society.

The aim of the IYA2009 is to stimulate worldwide interest, especially among young people, in astronomy and science under the central theme "The Universe, Yours to Discover". IYA2009 events and activities will promote a greater appreciation of the inspirational aspects of astronomy that embody an invaluable shared resource for all nations.

The IYA2009 activities will take place at the global and regional levels, and especially at the national and local levels. National Nodes in each country have been formed to prepare activities for 2009. These Nodes establish collaborations between professional and amateur astronomers, science centres, educators and science communicators in preparing activities for 2009.

The IAU is the international astronomical organisation that brings together almost 10,000 distinguished astronomers from all nations of the world. Its mission is to promote and safeguard the science of astronomy in all its aspects through international cooperation. The IAU also serves as the internationally recognized authority for assigning designations to celestial bodies and surface features on them. Founded in 1919, the IAU is the world’s largest professional body for astronomers. 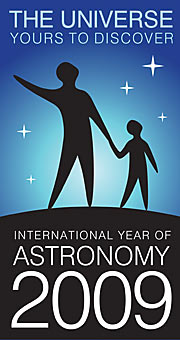