In October 2021 more than 700 people from 76 countries took part in the United Nations/Spain/International Astronomical Union Conference on Dark and Quiet Skies for Science and Society online, following the online workshop on the same theme held in October 2020. At this second meeting delegates focused on the feasibility of implementing the specific measures to mitigate the impact of artificial interferences affecting the visibility of the sky and the detection of cosmic radio signals recommended in the first conference. The results of this meeting are contained in the reports, which are now available online. The main findings of the conference will also be presented to the 59th Session of the Scientific and Technical Sub Committee (STSC) of the UN Committee for the Peaceful Use of Outer Space (COPUOS) in the form of a Working Paper in February 2022.

The Dark and Quiet Skies II conference and its reports focused on the three categories of artificial interferences that negatively impact astronomical observations:

The conference was co-organized by the United Nations Office for Outer Space Affairs (UNOOSA), International Astronomical Union (IAU), and the Government of Spain, with support from NSF’s NOIRLab. This second conference saw a more explicit involvement of the industrial stakeholders and of space policy experts, whose contributions were instrumental in presenting a credible review of the proposed mitigating measures as well as of possible regulatory guidelines.

The advantages to society that the communication satellite constellations are offering cannot be disputed, but their impact on the pristine appearance of the night sky and on astronomy must be considered with great attention as they affect both the cultural heritage of humanity and the progress of science. 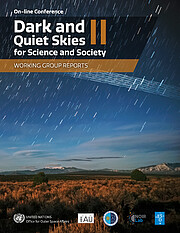