The most distant object ever to have been visited by a spacecraft has been given a new name: Arrokoth. The object, (486958) 2014 MU69,  became widely known by its nickname, Ultima Thule, after the New Horizons probe flew by it on New Year’s Day this year. Arrokoth, which means “Sky” in the Powhatan/Algonquian language, is now its official and permanent name, having been approved by the IAU Working Group for Small Body Nomenclature (WGSBN).

Arrokoth orbits beyond Neptune in the Kuiper Belt, its New Year’s Day encounter with New Horizons taking place six billion kilometers (3.7 billion miles) from Earth. This enormous distance influenced the choice of its name; “The name ‘Arrokoth’ reflects the inspiration we draw from looking to the skies, and wondering about the stars and worlds beyond our own,” said Alan Stern, principal investigator of the New Horizons science team, who were invited to suggest names to the WGSBN, as is the privilege of all discoverers of small bodies.

The decision to name Arrokoth in the Powhatan/Algonquian language honors the indigenous people of Maryland, the home of both the Johns Hopkins Applied Physics Laboratory, from which the New Horizons mission is coordinated, and the Space Telescope Science Institute, from which Arrokoth was discovered using the Hubble Space Telescope. Powhatan Tribal Elders gave their approval to use the term as the name for the celestial body, and took part in the naming ceremony at NASA Headquarters.

Arrokoth was discovered in July 2014, and was identified as a candidate for the historic flyby almost five years before it was achieved, giving scientists a closer look at its distinctive bilobate shape. Arrokoth’s significant features will also be named, in a process overseen by the IAU Working Group for Planetary System Nomenclature (WGPSN), which looks forward to collaborating with the New Horizons team.

Despite its distant, apparently alien nature, Arrokoth could be relevant to questions surrounding the origin of life on Earth. Unlike planets, which often undergo geological activity, many small Kuiper Belt objects have been largely unchanged for billions of years. For this reason, astronomers hope that studying these cold, faraway worlds might shed light on the formation of the Solar System and its planets, including our own. 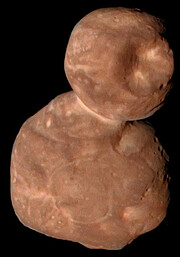