The International Astronomical Union (IAU) enthusiastically congratulates the three recipients of the Nobel Prize in Physics 2019 announced today. The Royal Swedish Academy of Sciences has decided to award this year’s Physics Nobel Prize  ”for contributions to our understanding of the evolution of the universe and Earth’s place in the cosmos,” with one half to James Peebles “for theoretical discoveries in physical cosmology” and the other half jointly to Michel Mayor and Didier Queloz “for the discovery of an exoplanet orbiting a solar-type star.”

The Nobel Prize in Physics 2019 rewards new understanding of the Universe’s structure and history, and the first discovery of a planet orbiting a solar-type star outside our Solar System. This year’s Laureates have contributed to answering fundamental questions about our existence. What happened in the early infancy of the Universe and what happened next? Could there be other planets out there, orbiting other suns?

Peebles’ work provides insights into physical cosmology that have enriched the entire field of research and laid a foundation for the transformation of cosmology over the last fifty years, from speculation to science. His theoretical framework, developed since the mid-1960s, is the basis of our contemporary ideas about the Universe in which just five percent of its content is known — the “normal” matter which constitutes stars, planets, and all life. The rest, 95 percent, is unknown dark matter and dark energy, which is a mystery and a challenge to modern physics.

The discovery of exoplanet Dimidium (51 Pegasi b) was announced on 6 October 1995 by Mayor and Queloz, who detected the hot Jupiter using the ELODIE spectrograph at the Observatoire de Haute-Provence. This was the first exoplanet to be discovered around a solar-like star. Since this discovery, more than 4000 exoplanets have been discovered. For only the second time in history, a campaign will in 2019 lead to the naming of stars and exoplanets: the IAU100 NameExoWorlds project.

The IAU President Ewine van Dishoeck comments: “This year’s Nobel Prize in Physics is special as it deals with two very different scales of astronomy. Jim Peebles works at the cosmological scale and Michel Mayor and Didier Queloz at the much smaller scale of solar systems. Both discoveries opened up entirely new avenues of research in astronomy, with the field of cosmology exploding since the 1970s and that of exoplanets becoming one of the most rapidly growing fields since 1995. We are now the first generation of astronomers that may have the tools to discover what dark matter and dark energy is, and to search for life on planets around other stars. This is a recognition of astronomy at its best!” 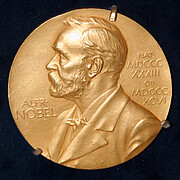