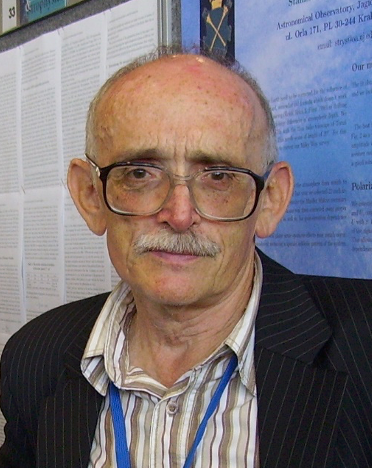 G. A. Krasinsky was born in 1939 in Leningrad (now St. Petersburg); graduated from the Leningrad University (1961); post-graduated from the Institute of Theoretical Astronomy (ITA) of the USSR Academy of Sciences (1964); was an ITA Staff Member (from 1964); Head of Laboratory and Chief Scientist in the Institute of Applied Astronomy of the USSR Academy of Sciences (from 1988); Doctor of Sciences in Astrometry and Celestial Mechanics (1989), Professor (2000), Honorary Scientist of the Russian Federation (2011), the President of the IAU Commission No.4 “Ephemerides” (from 2003 to 2006), a Member of the IAU Commissions No.7 and No.20, ILRS and IVS WGs; was awarded the USSR State Prize (1982), the Order of the Badge of Honour (1981) and the Order of Honour (2002); died on March 17, 2011 and was buried at the Pulkovo Memorial Cemetery.

G. A. Krasinsky was a Soviet and Russian astronomer, an eminent scientist in celestial mechanics, astrodynamics, astrometry and ephemeris astronomy (more than 100 scientific papers). His first papers dealt with the development of mathematical aspects in differential equations and qualitative celestial mechanics. He advanced a trigonometric theory of secular perturbations of the major planets; suggested new effective methods to expand perturbation functions in planetary and satellite problems; and studied the resonance structure of asteroid rings. The results obtained were included in the collective monograph “Minor Planets” (1973).

G. A. Krasinsky used his extraordinary abilities to combine theoretical studies with constructing numerical ephemerides in practice and processing optical and radio observations of celestial bodies. He co-authored the Unified Relativistic Inner Planet Motion Theory (the 1982 USSR State Prize) and contributed to the release of the Astronomical Yearbook Supplements No.21A (1980). The new generation ephemerides based mainly on this work, were used for the USSR space program. This resulted in a series of high-accuracy ephemerides of planets and the Moon (EPM) which are only comparable in accuracy with the well-known DE ephemerides of the Jet Propulsion Laboratory (USA). EPM ephemerides form the basis of Russian astronomical yearbooks and are used for the ground-based support of the GLONASS program.

The latest years of G. A. Krasinsky’s life were devoted mainly to radio astrometry. He made an outstanding contribution to the theoretical basis and practical implementation of the Russian radio interferometry network “Quasar”. He provided proof that it was possible to construct a highly accurate inertial coordinate system using the VLBI techniques. G. A. Krasinsky was in charge of developing the universal software ERA (Ephemeris Research in Astronomy) to solve various problems of ephemeris and dynamical astronomy and creating the database of motion and rotation of the Solar system bodies. The ERA System has found a practice application in processing various types of observations of celestial bodies, calculating their ephemerides as well as carrying out some specific applied tasks.

G. A. Krasinsky founded the Laboratory of Ephemeris Astronomy and headed it for many years. Many promising young scientists from Russia and other countries were trained in this laboratory. The scientific school of his student scientists and followers includes one Doctor of Sciences and six Ph.D. scientists.
IAU gave the name of Krasinsky to the Minor planet 5714 in 1997.