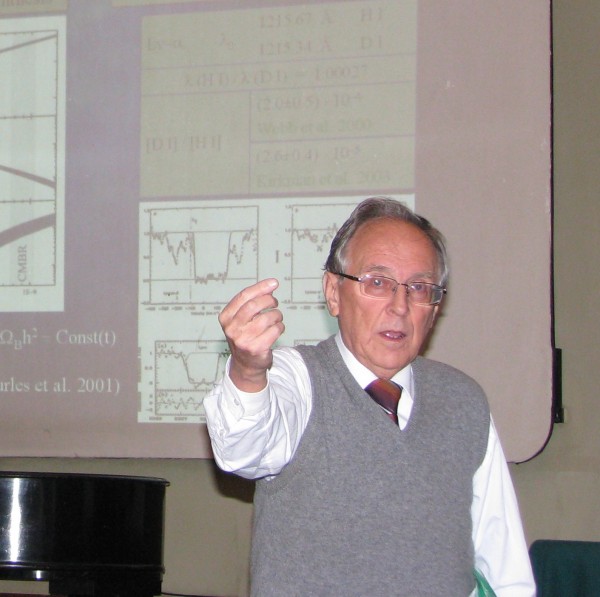 Dmitry Aleksandrovich Varshalovich, an outstanding Russian physicist, passed away on April 21, 2020, at the age of 86. He was a full member of the Russian Academy of Sciences (RAS), well known for his research in the fields of quantum theory, radiation theory, physics of interstellar matter, quasar physics and cosmology.

Dmitry Varshalovich was born in 1934 in Leningrad (former USSR), in a family of scientists-a prominent entomologist, Aleksandr Aleksandrovich Varshalovich, and a biologist, Vera Yakovlevna Skurikhina. In 1941, as the Hitler army invaded USSR, he was evacuated from Leningrad, returning with his mother in 1944. In 1952, he graduated high school with a "gold medal" (awarded for perfect academic performance) and entered Leningrad State University as a Physics major. He received his degree in 1957, specializing in Nuclear Spectroscopy, and began his scientific career at the Leningrad Physical-Technical Institute (LPTI, now Ioffe Institute).

Within several years, he carried out research in nuclear isomerism and nuclear spectroscopy, collaborating with L. I. Rusinov and L. K. Peker. During the same time, he co-authored, with I. V. Kurchatov and L. I. Rusinov, a book on nuclear isomerism (unfortunately, it was never published due to untimely deaths of Kurchatov and Rusinov in 1960). In 1961, Dmitry Varshalovich was transferred to the department of Theoretical Physics at LPTI, where he continued working on nuclear spectroscopy and interferential methods of studying gamma-ray emission of nuclei. Simultaneously, he became engaged in the theoretical astrophysics research, part of a new team, just recently founded at the initiative of the LPTI director B. P. Konstantinov and headed by A. Z. Dolginov.

Dmitry Varshalovich went on to continue working in this area for the entirety of his career. In 1966 he defended his PhD thesis "Dynamic orientation of atoms in the cosmic medium." The work appeared to be so significant that the leaders of the Thesis Committee, Ya. B. Zel'dovich and I. S. Shklovsky, as well as Ya. A. Smorodinsky, suggested that Dmitry Varshalovich be directly granted the degree of Doctor of Science and Mathematics. In Soviet Academia, the "Doctorate" would normally require significant additional scientific accomplishment following the initial PhD research — much later, if ever, in one's professional career — but, in Dmitry Varshalovich's case, the motion was unanimously supported by the Committee. Eventually, Dmitry Varshalovich lead the Theoretical Astrophysics Sector (group) — from 1986 to 2010--managing to maintain active research work conducted by the team even through the 1990s crisis period.

Dmitry Varshalovich had profound fundamental knowledge, sharpness of thought, competence, scientific intuition, and never-fading ability to come up with original ideas and innovate. A number of areas in modern Astrophysics have been developed with invaluable contributions from Dmitry Varshalovich.
In the 1960s-1970s he published a series of works, exploring, for the first time, dynamic alignment of molecular spins in a rarefied cosmic medium, resulting from resonance scattering of anisotropic radiation fluxes. The effect proved to be important in subsequent investigation of physical parameters and chemical composition of interstellar gas clouds, shells of stars, nebulae, comets, and other objects. In the same period, Dmitry Varshalovich proposed a hypothesis (first published in 1966) that maser pumping mechanisms in hydrogen atom quantum transitions may be realized in thermodynamically non-equilibrium interstellar gas clouds.

Varshalovich's interest in cosmic masers was piqued by the 1965 radio astronomy discovery of interstellar masers on transitions between rotational levels of OH molecules. In 1970s-80s, Dmitry Varshalovich organized extensive theoretical research in this area, with a large group of scientists contributing to the effort over the years. Major research was completed in collaboration with V. V. Burdyuzha, and, later, with W. Kegel and S. Chandra. Conditions of occurrence of cosmic masers, their energetics, pumping mechanisms, and polarization effects were investigated in detail, new masers were predicted, and novel probing methods for maser radiation sources were proposed.

Over the same period of 1970s-80s, Dmitry Varshalovich supervised research of interstellar molecular spectroscopy aimed at investigating the kinetics of molecular states in a strongly non-equilibrium interstellar gas. Many of these, now classic, studies on this subject were done in collaboration with V. K. Khersonsky. Experiments in laboratory modelling of physico-chemical processes in the interstellar medium were performed at Varshalovich's initiative; they showed the important role played by interstellar dust particles in the formation of organic molecules in space.

From the late 1970s, Dmitry Varshalovich initiated a series of immensely successful research work in quasar physics and cosmology. Together with Khersonsky, he developed theoretical methods of assessing non-equilibrium pre-galactic gas in the early Universe after hydrogen recombination, with a preview of future measurements of singularities in the background radiation spectrum in the radio and infrared bands. Concurrently with that, Dmitry Varshalovich launched precision spectrum studies of distant interstellar and intergalactic gas clouds transluminated by the radiation of quasars, which existed in the early Universe 10-12 billion years ago. In the course of this research, it was shown that cosmologically distant clouds contained H2 molecules (with S. A. Levshakov, 1979) and HD molecules (with A. V. Ivanchik, 2001).

These discoveries shed new light on the composition of matter and physical characteristics of the early Universe. In particular, the abundance of primary deuterium and the mean baryonic density in the Universe were independently estimated. The quasar spectrum analysis also enabled D. A. Varshalovich in a series of papers (with S. A. Levshakov, A. Y. Potekhin, and A. V. Ivanchik) to establish constraints on potential variations of fundamental physical constants in the course of the Universe's evolution. For this work D. A. Varshalovich (with A. V. Ivanchik and A. Y. Potekhin) was awarded the Grand Premium of the International Academic Publishing Co. "Nauka" for a Series of Papers in Physics.

Together with A. V. Orlov and A. V. Ivanchik, D. A. Varshalovich modeled the synthesis of primary chemical elements in the early Universe, qualifying constraints on the parameters driving cosmological models. Along with E. E. Kholupenko and Ivanchik, he modeled recombination of primordial hydrogen-helium plasma; these results are utilized in analysis of the observable anisotropy of microwave background radiation. Today, the research on matter in the early Universe is continuing by the team of scientists brought together and initially guided by Dmitry Varshalovich.

Dmitry Varshalovich also participated in many other research initiatives devoted to various aspects of physics and astrophysics. With support of his deep knowledge of principles of spectroscopy, his colleagues form the Space Research Institute of the Russian Academy of Sciences, accomplished results in the analysis of annihilation radiation spectra from the Galactic Center measured by the international gamma-ray astrophysics laboratory INTEGRAL (E. M. Churazov, R.A. Sunyaev, S. Yu. Sazonov, and others). This enabled them to determine parameters of the interstellar medium in the region of positronium annihilation.

The monograph Quantum Theory of Angular Momentum, co-authored by D. A. Varshalovich with A. N. Moskalev and V. K. Khersonsky, was first published in 1974, and became well known throughout the scientific world globally. The first volume of the new two-volume edition of Quantum Theory of Angular Momentum and its Applications (written together with Khersonsky, E. V. Orlenko, and Moskalev), was published in 2018, followed by the second volume in 2019 (with Khersonsky and Orlenko). This fundamental encyclopedic work will continue to be a handbook for scientists across different specialties for years to come. Over his career, Dmitry Varshalovich authored over 230 research papers, as well as several reviews and monographs. In recognition of his contributions to science, he was elected, in 1994, as a corresponding member, and, in 2000, a full member of the Russian Academy of Sciences. Dmitry Varshalovich was a Russian Federation State Price laureate in the field of Science and Technology (2008), got the Fock Prize (2001), the Belopol'sky Prize (1990), and prizes of MAIK NAUKA Publishers (1997, 2007). He was awarded medal of "Merit of the Motherland" of 2nd degree (1999) and the Order of Friendship (2010).

Dmitry Varshalovich was a member of the International Astronomical Union starting in 1976, and a member of the editorial board of the Pis'ma v Astronamicheskii Zhurnal (Letters to the Journal of Astronomy) since 1994. For many years, he was a member of the Academic Council at the Ioffe Institute, and of academic councils at various research and educational institutions.

For more than 40 years, Dmitry Varshalovich was engaged in teaching. From 1979, he served as a professor at the department of Space Research at the Ioffe Institute of the Leningrad Polytechnical Institute (now St. Petersburg Polytechnical University), heading the department from 2013 to 2018. His lectures on classical and quantum electrodynamics, dimension theory, nuclear physics, interstellar-matter physics, and other areas educated generations of physicists; he helped many of his students find their way to science. He actively promulgated scientific research, delivering popular lectures to a variety of audiences until the very last years of his life.

D. A. Varshalovich was remarkably well-rounded intellectual — while being an outstanding erudite in exact sciences, he was also deeply interested in biology, medicine, history, literature, and politics. As a schoolboy, he played violin, and was inspired by classical music throughout his entire life.

Notwithstanding his scientific accomplishments, Dmitry Varshalovich was humble, friendly, lively, and a well-disposed man, inspired by new ideas, and ready to discuss any topic with colleagues of any age or scientific seniority. As he stoically bore periods of serious illness, he almost never asked for help, and rarely resorted to help when offered; at the same time, he was always ready and eager to help others. His personal qualities and scientific talent deservedly won sincerest love and respect of many. His memory will live on in his work and in the hearts of his friends, colleagues, and students.

Memorial page and photos of Dmitry Aleksandrovich Varshalovich is available at the site of his home institution: http://www.ioffe.ru/astro/DTA/varsh/varsh1.html