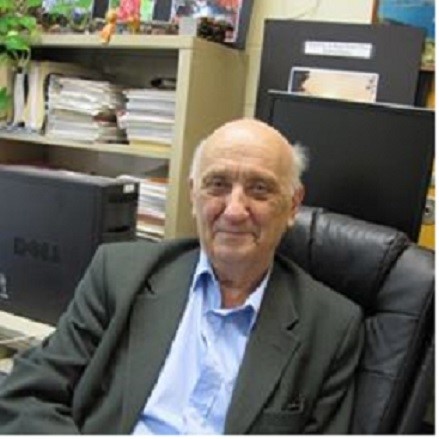 Professor Leonid Ivanovich Matveenko (20 December 1929 – 13 October 2019), doctor of physics and mathematics, was the head of the VLBI Laboratory of the Space Research Institute (IKI) of the Russian Academy of Sciences and was the founder of very-long-baseline radio interferometry (VLBI) in the USSR and Russia. He was born on 20 December 1929 in the village of Rossoshintsy in the Kirovograd region of Ukraine. Leonid graduated in the specialty of “radiophysics” from the Physics and Mechanics Department of the Leningrad Polytechnic Institute in 1956 and began his career as a radio engineer at the Crimean research station near Simeiz, a branch of the P.N. Lebedev Physical Institute (FIAN).

At that time the scientists of the FIAN station were designing a radio interferometer at meter wavelengths to study the angular structure of radio sources. Leonid Matveenko was actively involved in the implementation of this project and showed himself as a talented radio engineer and creative researcher. With the participation of Matveenko, a radio interferometric complex of the Space Communication Center in Evpatoria (Ukraine) was created and regular tracking of the Soviet spacecraft were carried out. In 1959, Matveenko and others at the research station successfully determined the flight trajectories of the first Soviet lunar space probes and the positions where they hit the Moon. For Matveenko this was his first experience in understanding the intricacies of radio interferometry, which turned out to be invaluable in his later work in implementing the VLBI technology.

With the support of I.S. Shklovsky of Shternberg Institute, in 1962 Matveenko, together with N.S. Kardashev and G. B. Sholomitsky, were the first to describe the requirements for tape recording–independent oscillator interferometry (VLBI). However, due to security concerns, publication was delayed until 1965. Starting in 1968, Matveenko began a long lasting collaboration with foreign colleagues implementing a number of international VLBI experiments. The successful 1969 observations between the FIAN 22 meter radio telescope in Simeiz, Crimea, and the Green Bank 140 telescope in West Virginia gave, for the first time, an angular resolution better than 0.001 arcseconds. In the following decades, Matveenko continued his research activities at the Space Research Institute (IKI), where he founded the VLBI laboratory. Exploiting his organizational and technical talent, Matveenko equipped a number of Russian radio telescopes with modern receivers and data recorders and initiated the development of the Russian VLBI correlator. Experiments on domestic and intercontinental baselines at 18, 3 and 1.35 cm bands led to significant contributions to the astrophysics of compact radio sources associated with quasars and cosmic H2O masers.

Leonid Matveenko also initiated the global VLBI network used to successfully measure the trajectories of aerostats in the Venus atmosphere - the VEGA project (1985-1986). For these studies he was awarded the 1986 USSR State Prize in Science and Technology. The resolving power of the VLBI is thousands times better than the most powerful optical instruments. "... if the Galilean tube opened the solar system to mankind, then VLBI is the whole world around us ...", wrote Leonid Ivanovich in his memoirs.

In addition to the VLBI work, for which he is best known, Matveenko also successfully developed a method for studying the angular structure of radio sources using lunar occultations. In the 60s-70s, his discovery of a shell and variable structure made significant contributions to our understanding of the nature of the Crab Nebula.

Prof. Matveenko was awarded the title of Honored Scientist of Russia and the Gold Medal of The American Biographical Institute (2006), as the founder of VLBI in Russia. He supervised ten candidate and one doctoral dissertations. For many years he was deputy editor of the Russian "Letters to Astronomical Journal," a member of the editorial board of the "Earth and the Universe," a member of the IAU, and a representative to the European VLBI Network. The results of his research have been published in more than 350 articles in scientific journals.