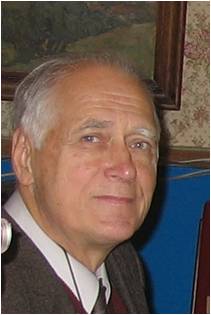 Edward V. Kononvich, one of the oldest SAI staff members, passed away on September 26, 2017 after a long illness.

Edward V. Kononovich was born in Moscow on November 8, 1931. He graduated from the Astronomy Division of the Department of Mechanics and Mathematics of Moscow State University in 1951, immediately enrolled as a post-graduate student at MSU to Joseph S. Shklovsky, and graduated in 1958 with the thesis "Model of the solar chromosphere according to spaceborne observations". In 1959, he started to the work at SAI and since then all his research and educational activity was connected with SAI and the Chair of Astrophysics of the Faculty of Physics of MSU. Edward Kononovich took part in founding the Krasnopresnenskaya laboratory of SAI, which he headed for many years and where he set up the heliophysics group.

Research interests Edward Vladimirovich have always been associated with solar physics and solar-terrestrial relations. In his works Edward V. Kononovich paid much attention to the fine structure of the solar chromosphere and photosphere and their connection with cycles of solar activity. This line of research gradually turned into a study of the relations of meteorological phenomena with the level and nature of solar activity and into the cooperation with the Institute of Applied Geophysics. The main line of research of Edward V. Kononovich in recent years has been associated with determining the patterns of the cyclicity of solar activity and its relation to geomagnetic and meteorological processes on the Earth (solar-terrestrial relations).

Edward V. Kononovich took part in almost all the SAI expeditions aimed at observing total solar eclipses and studying the corona and chromosphere of the Sun.

With his inexhaustible energy Edward Kononovich participated in developing new tools and carried out solar observations at most of the observatories of the USSR and the CIS. In the 1980ies he directed the construction of a new horizontal solar telescope (HSFA) at SAI Alma-ATA station (in cooperation with the Czech astronomers).

Educational and teaching activities of Edward V.Kononovich were the central part of his work. For many years he taught general astrophysics to first-year students, held a special course "Physics of the Sun" for undergraduates, and supervised a special astrophysical workshop on the structure and evolution of stars. Kononovich was a great science-writer of astronomy; the staff, students and graduate students remember his performances on television and his wonderful books: "The General course of astronomy", "Astronomy 11", "Sun, the star", etc. His textbook on General astronomy, which survived seven editions and was translated into many languages, served as a guide-book for more than one generation of Russian and foreign astronomers.

Edward V.Kononovich was Vise-President (1973-1976) and President (1976-1979) of the IAU Commission 46 “Astronomy Education” and a member (until 2015) of the IAU commission for Astronomy Education & Development, Commission 12 of the Division II Sun and Heliosphere, and Division C Education, Outreach and Heritage Edward V.Kononovich fought selflessly for maintaining astronomy in the secondary school curriculum.

Edward V.Kononovich was the editor-in-chief of four issues of the almanac “The Universe and us". For many years he struggled with bureaucracy to preserve the historical premises of the Astronomic-geodetic society, to promote astronomy among young people and students. Edward Kononovich has earned well-deserved prestige and respect of the SAI team for his sincerity, great energy, sensitivity, human warmth and kindness. He will always be remembered by his colleagues and pupils.