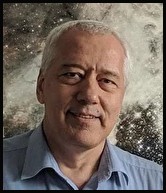 On the September 2nd, 2021, Vasily Gvaramadze has passed. He was a Leading
Researcher of the Department of Emission-line stars and galaxies in the Sternberg
Astronomical Institute of the Lomonosov Moscow State University (SAI MSU). Vasily
came to the SAI MSU at the fall of 90th, and he was then already a well-established
scientist, theoretist in the astrophysics, with a good background of the Abastumani
plasma physics school and European postdocs in Bulgaria, Italy, Germany… But during
his work in the SAI MSU he became famous by his observational results. In 2000thies he
had found ‘his own topic’: by mining infrared space telescope public archives, he
discovered specific features of the late evolutionary stages of massive stars - their dust
envelopes resolved in images by the space telescopes Spitzer and WISE. He started a
systematic persistent search for such objects. Besides, he appeared to show himself as an
excellent scientific manager: for every unique massive star he could gather an effective
team of observers, theoretists, calculators to reveal all details of its evolution and
observational signatures. His complex approach and deep analysis were extremely
fruitful. When past year he was nominated to the Lomonosov Scientific Prize of the MSU
with his series of works «Discovery and investigation of extremely rare stars», we have
known that for 15 years he has published more than 50 papers in the Q1-rank journals
including a paper in the Nature where he was the first corresponding author. His main
results obtained with the archive data and based also on the spectral observations initiated
by him at the large telescopes - 11m SALT and 6m Russian BTA - included: three ‘true’
LBV stars, five blue supergiants with circumstellar shells, fast-rotating run-away massive
stars with asymmetric nebula, a supernova remnant around the massive X-ray binary
SXP1323 in the SMC, a white-dwarf merger, and many other interesting phenomena…
In the SAI MSU Vasily Gvaramadze co-headed a long-lasting scientific theme
«Supernova, massive stars, and their interactions with circumstellar medium». The death
of such outstanding scientist at the peak of his activity is a great loss for the SAI MSU
and for all world astronomy.