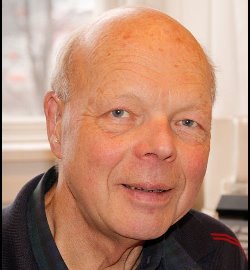 “On 29 August 1943, the Danish Government resigned from office. The Danish navy blew up its own warships. The people left the factories to go on strike. And the German occupiers called a state of emergency. On that day, I was born.”

This is one of the tales that Johannes Andersen, who passed away on 28 April 2020, enjoyed telling. And it is one that in many ways illustrated his personality: a no-nonsense, outspoken straight-talker, principled, often with strong opinions, but also in rich possession of a feeling for responsibility, fairness and a great sense of self-irony and, indeed, humour. Johannes was born in the small town of Skive on the Danish peninsula of Jutland during those unruly days. He graduated from Copenhagen University in 1969, winning a Gold Medal from the university for his outstanding thesis, and was awarded a Dr.Sc. from that same university in 1991. While his Alma Mater remained his main base throughout his career, he spent time at the Observatoire de Marseille (1970–71), the Dominion Astrophysical Observatory (1971–72) and the Smithsonian Astrophysical Observatory (1986–89). Shorter research stays included a visit to the Observatoire de Paris-Meudon in September–December 2000.

His main scientific research focused on observational studies of the chemical and dynamical evolution of the disc of the Milky Way as well as the study of stellar evolution, especially the reliability of stellar ages. A seminal paper on UVES measurements of the uranium line in CS 31082-001 that he co-authored with R. Cayrel, M. Spite, and V. Hill appeared in Nature in February 2001 and described the first measurement ever of uranium outside the Solar System. All in all, his work resulted in many hundreds of research papers.

Johannes’s contributions to the field of astronomy in Denmark and internationally are immense. Alongside his observational activities, he became deeply involved in the Danish instrument centre IJAF (now IDA), which equipped the Danish 1.5-metre telescope at ESO and the Nordic Optical Telescope (NOT) with state-of-the-art CCD and near-IR cameras. He went on to serve as the influential Director of NOT between 2002 and 2012 and was instrumental in making NOT a modern, flexible and highly efficient telescope with an impressive scientific output. Johannes was also closely associated with the European Southern Observatory (ESO) in many ways. He was a frequent user of its telescopes, including the VLT. He was a member of ESO’s Scientific Technical Committee (1993–97), serving as its chair between 1993 and 1995. He chaired the ESO Working Group on the Scientific Priorities for La Silla in the VLT Era (1994–95) and in 2006 he took part in the ESO Working Group on Political Issues Connected with the Choice of Site for an ELT. Not surprisingly he would be called upon to participate in, and sometimes lead, many other boards, committees and working groups, including as Chair of the ERA-NET ASTRONET Board (2005–2010).

Back in Copenhagen, he served two terms as Director of the former Astronomical Observatory of Copenhagen University and this justifies a little anecdote that says a lot about him. As many an institute director will recognise, at some point he faced tough demands to reduce the budget. It would inevitably mean redundancies. Johannes, however, did a quick calculation. He could keep his colleagues on the institute staff — if he took leave of absence without pay. And so he did.

In the context of the IAU, he served as President of Commission 30 Radial Velocities (1985–1988), and became Assistant General Secretary in 1994 and General secretary in 1997, ending his term at the IAU General Assembly in Manchester. On his watch, the IAU took great strides to expand its educational remit, an activity of special interest to Johannes and which laid the ground for the later significant evolution of these activities. He blazed the trail for “opening up” the IAU to the public and was the initiator of the first IAU web pages.

Johannes was not one to shy away from controversies. As a selfless pragmatist, he took up the battle against companies selling star names and had to deal with the first Pluto dispute and a Near-Earth Object scare, all occasions when the IAU had to react publicly to a controversy without much time to prepare.

He also succeeded in establishing links with the Gruber Foundation, opening up entirely new avenues for the IAU. On behalf of the IAU, he took part in meetings of the United Nations Committee on the Peaceful Uses of Outer Space between 1997 and 2003, when the Committee began to give serious consideration to the potential threat from Near-Earth Objects.

After his retirement from the Niels Bohr Institute, he developed the idea of a historical book about the IAU, set to appear on the occasion of the Centenary of the Union. At the Blaauw@100 symposium in Groningen in April 2014 he recruited David Baneke, the Dutch historian of science, and Claus Madsen as co-authors for the project. Of their collaboration, David Baneke wrote: “Johannes clearly had strong feelings about the IAU. But what struck me most was that, even though he had strong opinions and a long and detailed memory, he really listened to what I, a much younger historian who had never attended an IAU meeting before, had to say, even if I was sometimes critical about something he wrote. That demonstrates real intellectual curiosity and integrity.” Interested readers are referred to an interview with Johannes, conducted by Claus Madsen, in that same book. In this interview Johannes described the “boy scout” attitude he had towards work, an attitude illustrated by the work he did drafting new IAU statutes and by-laws, together with other members of the IAU, and by his extensive involvement in the practicalities of the international organisation of astronomy.

Whilst the book was being written, however, Johannes entered a twilight phase, suffering from continuously diminishing eyesight and impaired hearing, and also increasingly struggling with motor issues. Writing became a huge challenge, but he overcame it thanks to his tenacity and iron will — as always he was focused on the task at hand. Alas, the advanced state of his illness prevented him from attending the Centenary Symposium in Brussels in April 2019. But the book, The International Astronomical Union: Uniting the Community for 100 Years, in which he took great pride, was there, ready to be presented. It was to become his last major contribution to astronomy, but he leaves behind an impressive legacy and many fond memories among his friends

Over the years, Johannes found a strong supporter and partner-in-spirit in his wife, Birgitta Nordström, with whom he shared not only a long marriage but also quite a few scientific endeavours. During their stint at the Dominion Astrophysical Observatory, Johannes acquired the nickname “the Great Dane”. A Great Dane indeed...

Our thoughts are now with Birgitta and their three children, Karin, Ulla and Erik in these trying days. Johannes will be missed.