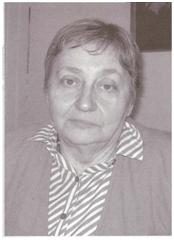 "If one says the words planet and map together, Kira Borisovna Shingareva is the number one figure", the Russian weekly Russkij Reporter wrote in 2010. She certainly was the driving force behind planetary cartographic activities at all levels as a professor at MIIGAiK, the Moscow State University for Geodesy and Cartography. Her students of extraterrestrial geography include students from high school to university and post-graduate levels and even her colleagues.

Kira Shingareva graduated from MIIGAiK in 1959 as an astronomo-geodesist and was admitted to the Dresden University. She graduated from the Technical University of Dresden in 1961, received her PhD in 1974, and became a Doctor of Science in 1992. She has held the position of principal scientist at the Laboratory of Comparative Planetology at the Space Research Instutute at the Academy of Science untill 1977.

Between 1976 and 1978 Kira Shingareva completed a second degree in economics from the Lomonosov Moscow State University at the Faculty of International Relations. From 1977 until recently, she worked at the Department of Economics and Business of MIIGAiK, successfully combining teaching in a number of scientific disciplines with her work in the Planetary Cartography Laboratory of MIIGAiK .

Shingareva participated in the Russian National Space program by mapping the Moon, Mars, Phobos and Venus and selecting landing sites for the early Moon probes. Her effective management enabled MIIGAiK to carry out its planetary cartographic activities when financial aids stopped due to the Mars-96 spacecraft failure. She also helped revive the laboratory as MexLab (MIIGAiK Extraterrestrial Laboratory or Comprehensive Laboratory of Studies of Extraterrestrial Territories) in 2010 which provided a place of work and study for 50 students and young scientists and made it one of the key international planetary science centers of Russia.

Shingareva was concerned not only with the geographic and cartographic aspects of planetary bodies, but also with place names: starting in the late 1960s, she helped the development of the planetary nomenclature. Her first presentation at the IAU 1967 meeting was about the proposed new nomenclature of the far side of the Moon; that was a starting point in restructuring the system of planetary nomenclature. She was also vice-chairman of the Space Toponymics Commission of the Russian Academy of Sciences. She believed that the management of planetary toponyms should be passed from IAU to an interdisciplinary UN commission of geographers, geologists, and phylologists.

Shingareva's main collaborative project with her colleagues was the creation of the Atlas of Terrestrial Planets and their Moons (1992) the preparatory work for which took 12 years. The atlas was digitized and translated into English in 2007. Based on this work, Shingareva initiated the production of the series "Multilingual Maps of the Terrestrial Planets and their Moons". Both of these projects are unique and aim to show the results of planetary discoveries to a wide and international audience in a cartography-based format.

She co-authored a high school textbook entitled "Geography of extraterrestrial territories" (2009) which, along with the new, high-school-targeted version of the atlas (Atlas of the Solar System, 2005) now provides the foundation of planetology education in Russia.

She showed tireless commitment and enthusiasm to planetary cartography, which she passed on to subsequent generations. She lived during the most exciting era of planetary explorations, at a time when she had to make the most out of the limited resources available. As she said, we move forward, step by step.

She is commemorated by the main-belt asteroid 294595 Shingareva and the small but very unusual Lunar farside crater Kira, named by her American colleagues, which will be another planetary reminder of her.